Check out the National Constitution Center's biographies of the Founding Fathers! https://constitutioncenter.org/learn/educational-resources/founding-fathers[/caption]

It's Founders Month here in Florida! According to the Florida Department of Education,

So what does this mean for our schools and kids and teachers? Basically, it's time to do some learning about the men and women who have helped shape this state and this country. Here on our Florida Citizens blog, we'll be doing at least two posts a week with a brief overview of a particular Founder, Framer, thinker, or shaper of this state or this nation and how they made an impact. 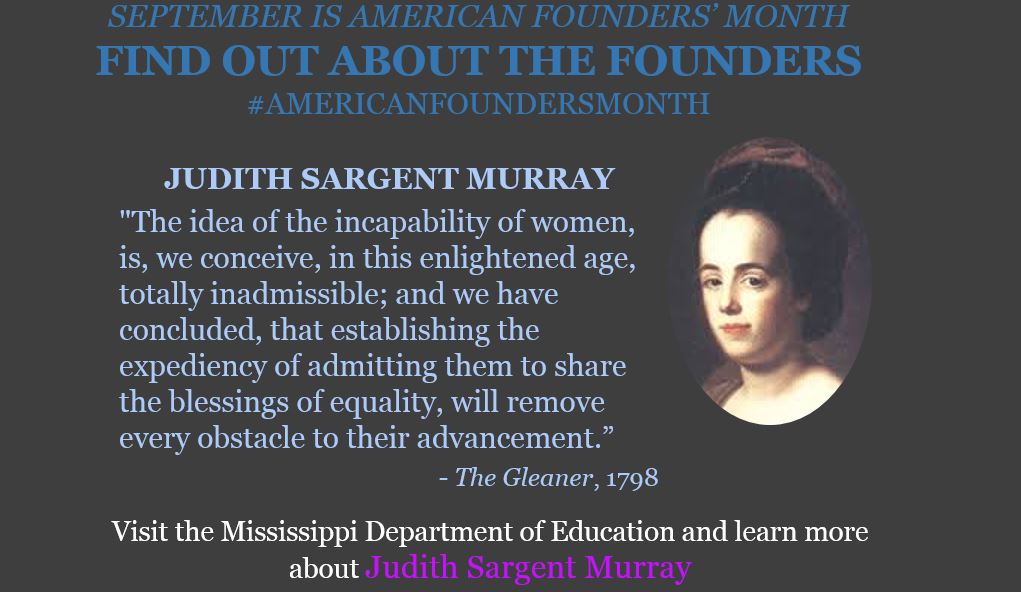 Judith Sargent Murray was born in pre-Revolutionary Boston, the daughter of a well-to-do merchant family. It as fortunate for us, as it was for her, that her parents believed in educating their daughters as well as their sons. Unfortunately, this education was limited to reading and writing; Sargent Murray had little opportunity for advanced education. Instead, she took advantage of her father's vast library and educated herself in history, civics, philosophy, literature, and so much more. This education, so much of it self-taught, she put to work as a writer and thinker and, most importantly, advocate for the rights of women and the equality of the sexes.

For Judith Sargent Murray, the way in which we consider the roles and educations of boys and girls was unjust, stifling, and wrong. In her seminal work, 'On the Equality of the Sexes' (1790), she raises doubts about the argument that men are inherently the intellectual superiors to women:

“Yet it may be questioned, from what doth this superiority, in thus discriminating faculty of the soul proceed. May we not trace its source in the difference of education, and continued advantage?...As their years increase, the sister must be wholly domesticated, while the brother is led by the hand through all the flowery paths of science”

In other words, the only reason men can claim superiority to women is because we do not give women the same education and opportunities as men! This theme would reappear throughout her work over the years, and she never ceased believing that America offered a great opportunity for a reconsideration of the role and education of girls. The new nation, after all, needed women who would raise the next generation to believe in and understand the American spirit and model, a 'Republican motherhood' that required educated, passionate, and (to a degree for its day) liberated women.

Sargent Murray practiced what she preached, educating the children in her house as she believed they deserved and as was right. She also wrote hundreds of essays and letters and articles, many of which were published under pen names in such a way as to hide the fact that she was a woman, for she feared her arguments would be automatically rejected. She was a 'Founding Mother' of the pursuit of equal rights, an advocate for the American project, and someone who encouraged the new nation to live up to the ideals it promised. You can learn more about the wonderful Judith Sargent Murray from this excellent lesson.

Grab the PowerPoint featured at the top of this post: JSM 2019

And of COURSE this Freedom Month don’t forget the Preamble Challenge from our friends at the Civics Renewal Network! Check it out today!

Next up: Thomas Jefferson!