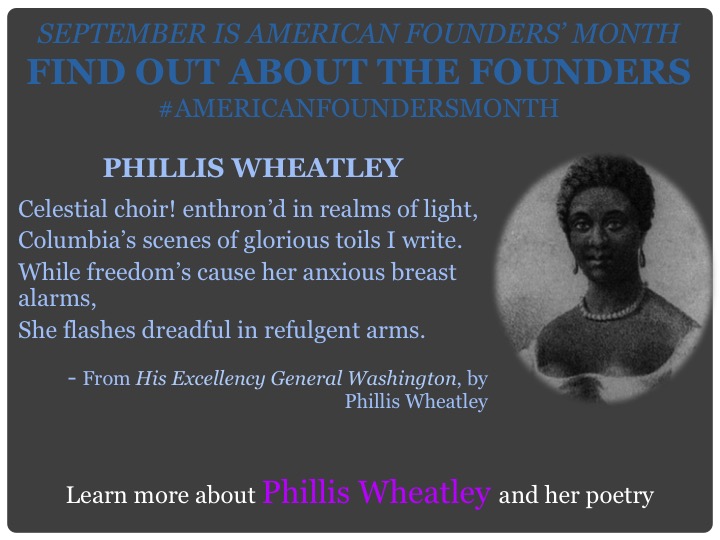 American Founders' Month (and Freedom Week) continues in Florida. Today, we look at an early voice of patriotism, liberty and hope: Phillis Wheatley.

Wheatley was born in Africa and enslaved as a young girl, sold to a wealthy Boston merchant family. There, she was educated, in the classics and in history and philosophy, discovering the joy of writing. She became a poet, recognized in London and in Boston for her prose. Indeed, her poetry inspired even other poets to write poems in her honor! She was, eventually, emancipated as a young woman, freed from the confines of slavery. Her writing continued, her prose celebrating the Revolution and its leaders, her Christian faith, her love of life and freedom, and the struggles against slavery. Sadly, Phillis Wheatley died very young, at about the age of 31, and her voice, one of the first and strongest African-American voices in our early history, was silenced. But we still have her poetry, and you can learn more about Phillis Wheatley and her celebrated poetry in this wonderful lesson.

Grab the PowerPoint slide featured at the top of this post: Phillis Wheatley AFM

Introduction to the Founding Fathers

Who Was George Washington?

Abigail Adams: Founding Mother and so much more

John Adams: A Hero of Liberty

James Madison: Father of the Constitution

The Sons of Liberty: The Tea Party and More

Alexander Hamilton: More Than a Musical

George Middleton: An Early Leader for Civil Rights and Equality